Migration, Water, and Climate Change Adaptation – The Path to the UN 2023 Water Conference 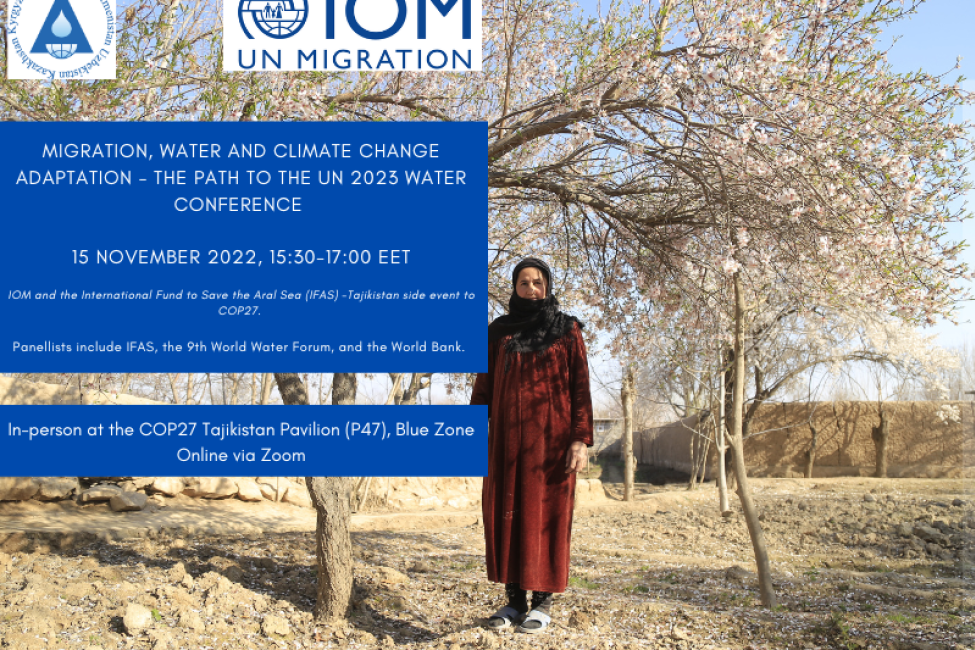 Climate change is increasing the frequency and severity of sudden-onset hazards as well as leading to rainfall variability, heatwaves, protracted drought, and glacial melt. According to the Sixth Assessment of the Intergovernmental Panel on Climate Change (IPCC), approximately half of the world’s population currently experiences severe water scarcity for at least some part of the year due to climatic and non-climatic drivers1. Between 2001 and 2018, 74 percent of all disasters were water-related. Of the 30.7 million displaced due to disasters, 14 million occurred in the context of floods, 14.6 million in the context of storms and 320,000 in the context of droughts (IDMC, 2021). Drought is impacting the lives and livelihoods of people by causing land degradation, food insecurity, and reducing agricultural production3. Pre-existing inequalities and vulnerabilities are further amplified by water-related hazards, especially for those living in hazard-prone areas and relying on primary sector livelihoods. While temporary labor migration is an autonomous adaptation strategy to seasonal water stress, those exposed to prolonged water insecurity could migrate permanently, likely to urban areas.

The impacts of migration on water sources are largely discussed in negative terms, mainly focusing on the increased demand for water in areas of destination. The positive impacts of migration on water security, such as access to finance for adopting irrigation technologies4, are rarely considered. Migration could also enhance climate change adaptation by providing an opportunity for livelihood diversification, channeling income into resilient infrastructure, and leading to the adoption of climate-smart practices and technologies.

During the Water Action Decade and following the outcomes of the 9th World Water Forum in Dakar in March 2022, which includes migration, increased water diplomacy is needed to enable migration to be a powerful driver for climate change adaptation. Enhancing knowledge and policy coherence on migration, water and climate action could increase benefits for migrants and their families and reduce pressure on climate-vulnerable destinations and sending communities. Transboundary water cooperation and well-managed water governance are needed to protect shared water resources and promote the human right to safe drinking water5, including those of migrants and their families. However, there has been limited integration of the water-migration nexus in many global, regional and national policy frameworks.

Increasing international support for water action and strengthening access to significantly scaled-up adaptation that is inclusive of migration dimensions is key to implementing international commitments. In the margins of the 27th Conference of Parties (COP27) of the United Nations Framework Convention on Climate Change and ahead of the 2023 UN Water Conference, it is important to mobilize stakeholders for the integration of migration perspectives into water action as governments renew, and develop new commitments. Enhanced global partnerships and cooperation that focus on better planning for increased populations and safeguarding the needs of displaced people in the context of water security will play a key role in the achievement of the Paris Agreement as well as, the achievement of the 2030 Agenda and its SDGs.

The International Organization for Migration (IOM) and the International Fund for Saving the Aral Sea-Tajikistan (IFAS-Tajikistan) will be organizing a dedicated side event to discuss the role of global partnerships in addressing the migration, water and climate change nexus, especially in the context of upcoming 2023 UN Water Conference. The side event will be a moderated panel discussion with panelists from Tajikistan, Senegal, and the World Bank Group, followed by a Q&A segment. It will take place on Tuesday 15 November from 15:30 – 17:00 EET (Egypt Standard Time) with a total duration of 90 minutes. The event will be held at the Tajikistan Pavilion, Pavilion 47 (P47), within the Blue Zone.