“Now that climate change and migration are an integral part of the Paris agreement, we can justifiably speak of ‘climate migration` and ‘climate migrants’. [...] We face major migration and refugee movements, and climate change is among the root causes of the record number of persons forced to migrate. By taking action to harness the positive potential of migration as an adaptation strategy to climate change we can support those who might need sooner or later to migrate with dignity. [...]” Not all of these people will become climate migrants, but now is the time to get prepared in order to avoid future tragedies.”

COP21 in Paris in 2015 led to the adoption of the Paris Agreement on climate change, the first universal and binding agreement with the goal to keep global average temperature rise below 2°C above pre-industrial levels. The Paris Agreement was also a breakthrough for migration, as it specifically referred to migration and human mobility, calling for respecting and promoting rights of migrants, and a mandate to establish the Task Force on Displacement. The Paris Agreement entered into force on 4 November 2016, with 100 countries ratifying the agreement and exceeding the ratification requirement of at least 55 countries. This year’s COP22 in Marrakesh (7-18 November 2016) is as important in order to confirm the states’ commitments, cooperation and dynamic engagement. ‎COP22 is also an important event for future action on climate migration.

A number of institutions serving the Convention and the Paris Agreement, including the Adaptation Committee (AC), the Least Developed Countries Expert Group (LEG) and the Executive Committee (ExCom) of the Warsaw International Mechanism for Loss and Damage associated with Climate Change Impacts (WIM), have advanced work on their respective mandates in preparations of COP22. To support the implementation of the Paris Agreement, namely, issues on Nationally Determined Contributions covering both mitigation and adaptation have advanced and will continue to be explored at COP22. Moreover, the WIM ExCom adopted in 2016 the terms of reference of the Task Force on Displacement and elected its members. To contribute to this work, IOM hosted the Technical Meeting on Migration, Displacement and Human Mobility in Morocco in July to support the work of ExCom WIM and responded to the call on sharing existing knowledge and information on human mobility and climate change.

IOM co-organizes this year three side events at COP22 : 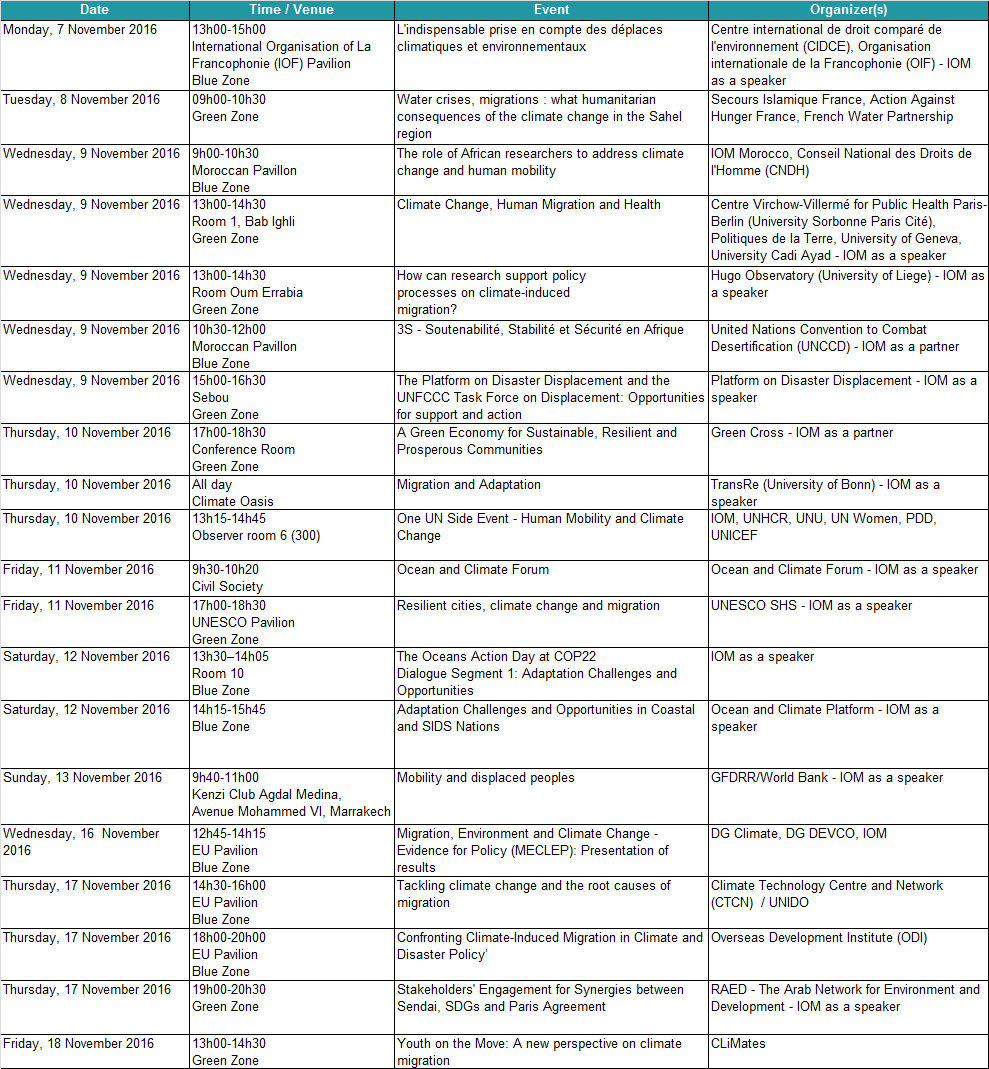 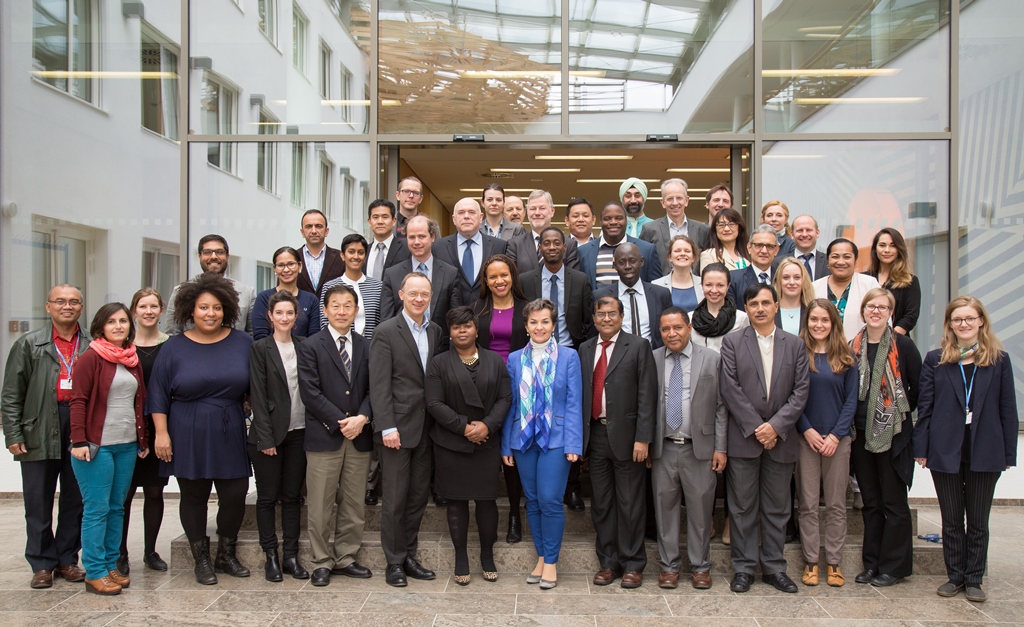 IOM, in collaboration with the Advisory Group on Climate Change and Human Mobility, organized two side events on migration and displacement at the May Bonn Climate Conference – the major global meeting after COP21 in Paris and in the lead up to COP22 in Marrakesh.

The first event brought together specialists from the Internal Displacement Monitoring Centre (IDMC), the United Nations University (UNU) and the University of Liege, to discuss the evidence and knowledge available to support policymakers in responding to climate migration and displacement. Findings from the IOM-led MECLEP project as well as IDMC's new Global Report on Internal Displacement were shared with an audience of 70+ people. Report on this event is available on the UNFCCC Newsroom.

The second event focused on the UNFCCC Taskforce on climate-related displacement, to be created under the leadership of the Executive Committee (EXCOM) of the Warsaw International Mechanism for Loss and Damage (WIM), that arose from a COP21 Decision linked to the implementation of the Paris Agreement. Co-chairs of the EXCOM as well as representatives from the Government of Switzerland and Action Aid discussed the stakes around the creation of the Taskforce and its foreseen work programme.

In connection to this, IOM HQ and IOM Berlin GMDAC organized a joint media briefing with Postdam University in Berlin that attracted a large amount of media attention. 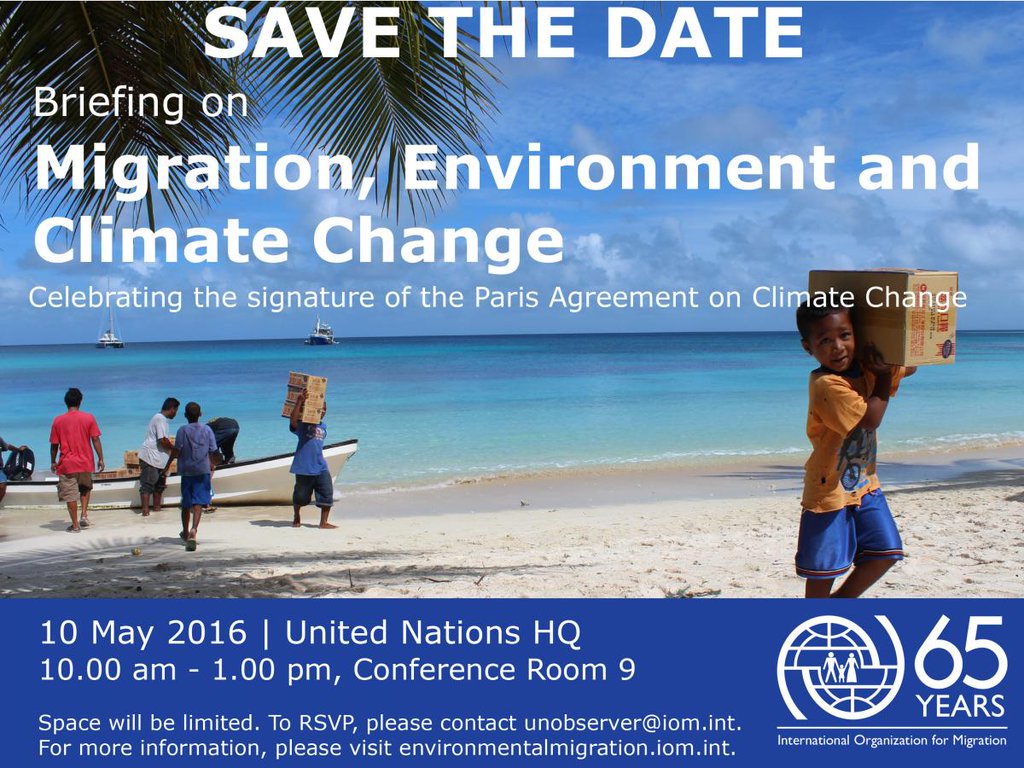 The Permanent Missions of Bangladesh and France to the United Nations, in collaboration with the International Organization for Migration (IOM), convened a briefing on Migration, Environment and Climate Change. The opening remarks were delivered by Shereen D’Souza from the US Department of State, acting in her capacity of the American Co-chair of the Warsaw International Mechanism, the body of work tasked with mainstreaming human mobility questions in the implementation of the Paris Climate Agreement under the Climate Convention (UNFCCC).
The briefing brought forth key messages that better understanding and exploration of the nexus between migration, environment and climate change is critical to moving this agenda forward and to ensure engagement of the international community. Increased data collection and analysis on issues of climate migration is key to shaping response and preparedness, and contextualized response to climate change and environmental degradation, and resulting displacement, is necessary. The Paris Agreement does not commit countries to address the legal needs of climate-displaced migrants, leaving broader gaps in rights and funding, and these legal gaps should be remedied. Panelists agreed that the international community must capitalize on current momentum and political will to address climate migration and for policy coherence in addressing climate migration.

Bangladesh, France, Germany, USA as well as Columbia University, the Office of the High Representative for the Least Developing Countries and SIDS (UN-OHRLLS) and Karen AbuZayd, the Secretary-General’s Special Adviser on the Summit on Addressing Large Movements of Refugees and Migrants, were among the panelists and over 80 participants joined the briefing.
The webcast of the event is available here: http://webtv.un.org/live-now/watch/migration-environment-and-climate-change/4823608373001

What does the Paris Agreement mean for us?
#ParisAgreement #Means4me

Thematic Panel and Training Workshop on “Migration, Environment and Climate Change in the lead up to COP22”
22-24 March 2016
Rabat, Morocco 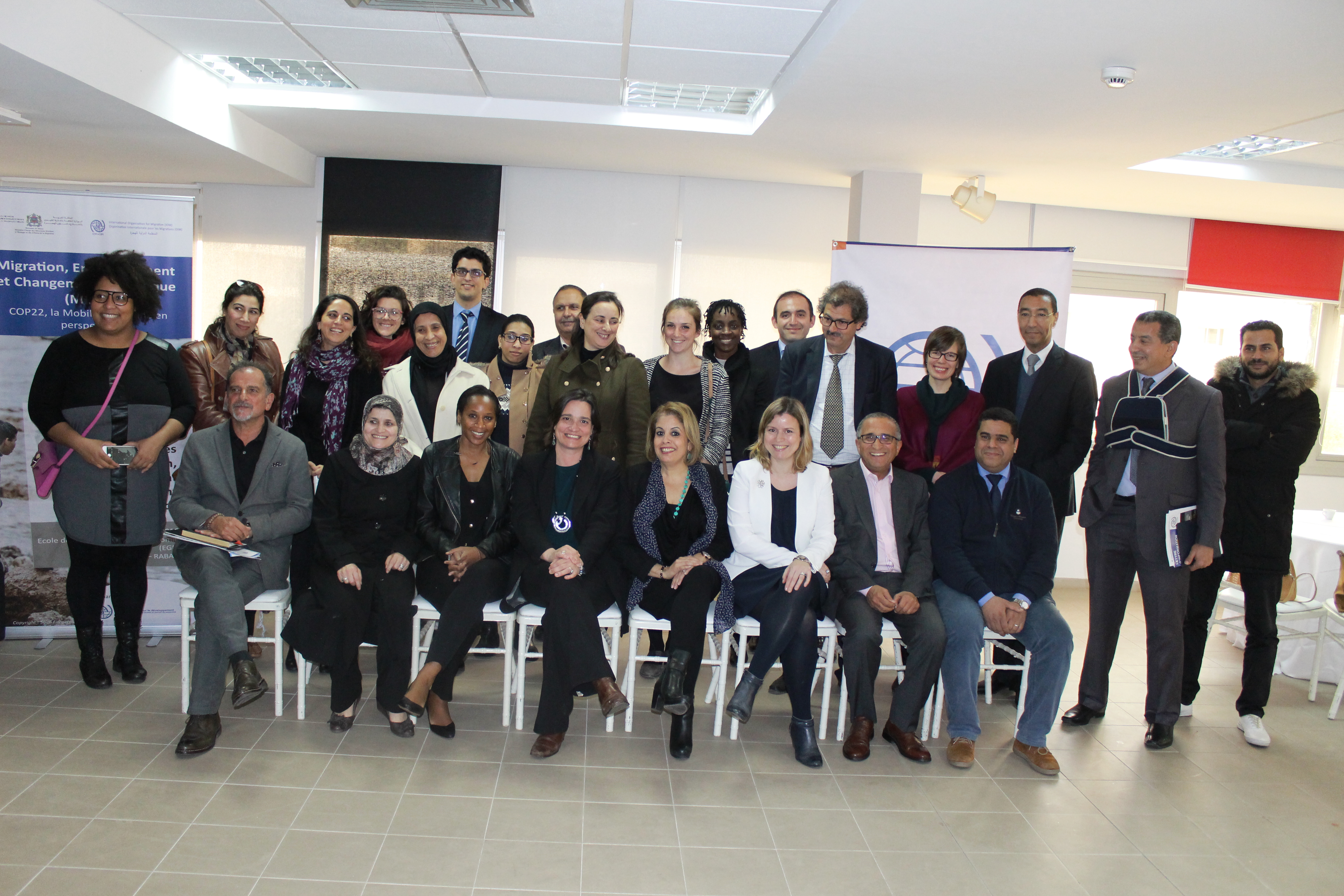 In preparation for COP22, a Thematic Panel on Migration, Environment and Climate Change brought together key ministerial partners as well as representatives from NGOs, intergovernmental organizations and the academia. This event was followed by the organization of the first specialized training workshop on Migration, Environment and Climate Change in Rabat, funded by the IOM Development Fund. Both events were of particular significance considering that Morocco is organizing the 22nd Conference of the Parties (COP22) of the United Nations Framework Convention on Climate Change (UNFCCC) on November 2016. Morocco experiences many different forms of migration as a country of origin, transit and destination with large occurrence of internal migration; whilst being hit by a variety of climate and environmental impacts, such as desertification, floods etc. The workshop demonstrated that there is a strong interest in better understanding the evidence on the climate migration nexus and a willingness to work across policy areas to find concrete solutions. In that respect, the workshop focused on identifying concrete follow up action in Morocco to support COP22 and Morocco’s Chairmanship of the COP throughout 2017. 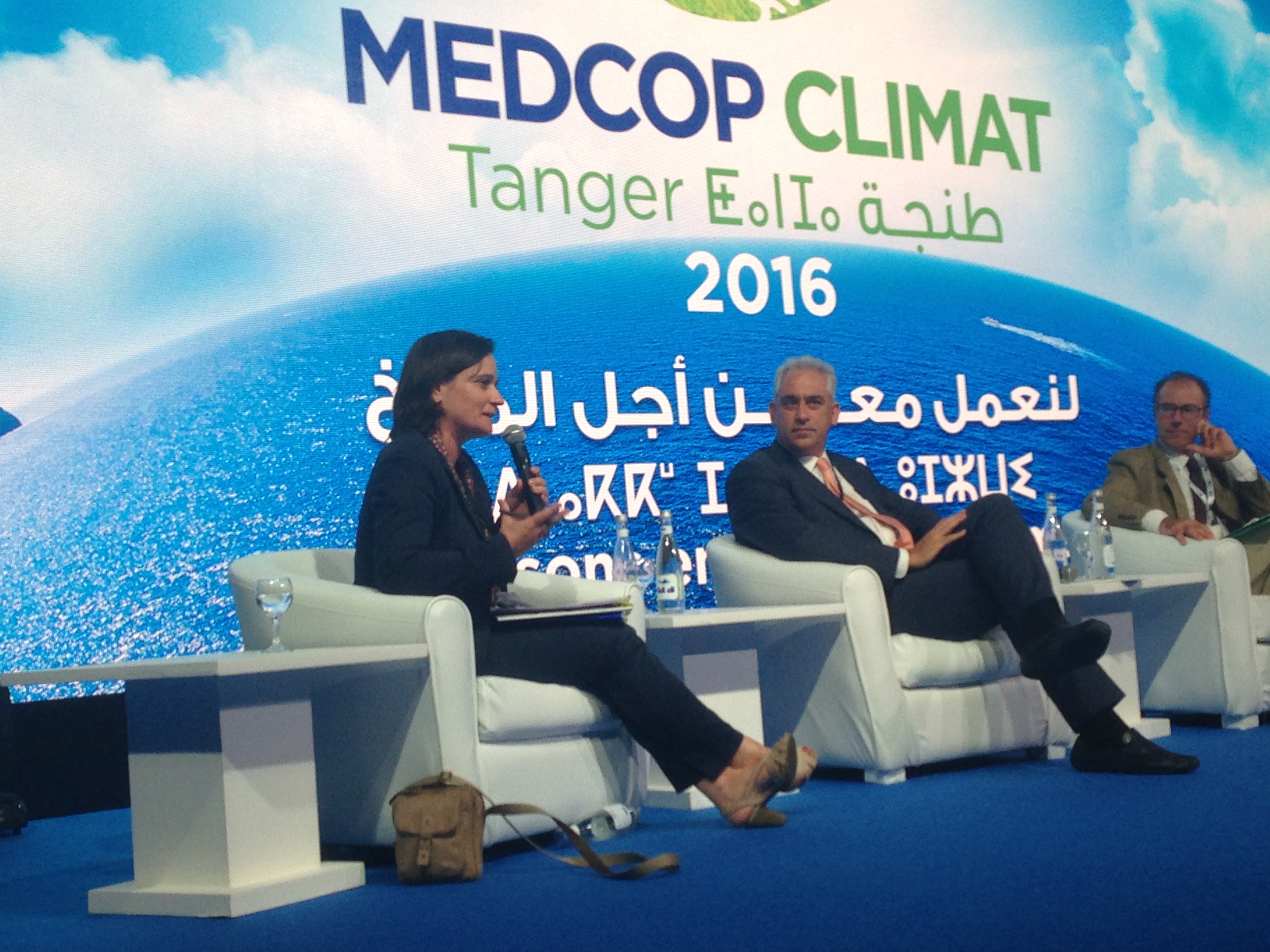 The 21st Conference of the Parties (COP) to the UN Framework Convention on Climate Change (UNFCCC) was referred to as the COP of Decision, highlighting the historical nature of the Paris Agreement. This year, COP22 is expected to be the COP of Action. IOM has been actively involved in the preparatory phase of COP22 in the Kingdom of Morocco, by leading research and enhancing capacities and participating at all the events organized by the COP22 Steering Committee and its partners. As the leading international organization for migration, the IOM contributes to the integration of migration in climate action - climate migration being a key-thematic area revealing the human face of climate change.

Human Mobility in the UNFCCC